Don't know if I told this story before or not, thought to drag it out for Halloween, but office kept me in the panic box for a week and just now found it where I last laid it down. Thought I would pick it up and lay it on you:

We pulled off the interstate to get some food, hungry as a boar hog. Hit the exit, then went one block off the north side of the freeway and there at one single intersection was... FIVE different chicken shacks. Popeye's, KFC, Chik Fil A, Chicken U Lickin, you name it. I was gobsmacked; never seen so much fried chicken in one square mile much less one square block. I look over and Yoda's mouth is hanging open, dragging the asphalt. He is a particularly hard core bird eater, you might even call him a "thigh guy". He mutters something about it being "it's Chicken Xanadu...beautiful... beautiful", spinning around in a dazed circle. A thickly oily chicken haze permeated the air up to about 20 feet high all around, marking a kind of pale rainbow halo around the bright afternoon sun. All the sudden, I got this shiver. Felt like we was in the middle of one of those Twilight Zone episodes. All I could think of was, we have made a bad turn off the road into the land of the Chicken People or the Children of the Chickens, or worse yet, the Stepford Chicken People. People kept shuffling in and out of the chicken shacks all around us, hundreds of them, kinda drooling a little, teetering along with this, well, HUNGRY look in their flinty eyes. I’d heard zombies are prone to bite chunks out of the undead, but nobody was interested in us newcomers, we weren’t…beer battered. And the people just kept coming, all around. Not just a few people in dribs and drabs, but like a steady... procession. In and out and in and out and in and out…. Like they were all somehow being pulled, no, DRAWN to the KFC. Same thing over at the Chicken U Lickin, and the other shacks, people marching steady in and out, cars backed up out into the state route, turn signals blinkin’ in unison, all staring, all wanting to GET IN THERE WHERE THE CHICKEN IS.

And all of a sudden again it FELT really creepy, like if we stayed there very long, all we'd wanna be doing for the rest of our lives was standing' around a big kettle, pitchin' big fryers into boiling hot oil, with a kinda contented blank smile on our moony faces. I punched Yoda in the arm to knock him outta his stupor and we jumped in the truck and pulled into the drive through. The lady in the window takes our order and turns to walk away, but then slowly turns back and looks at us with this big dish eyed grin and goes, "you boys want some GIZZARDS with that?" We got us a box of white meat with gravy and burned rubber outta there like Richard Petty in the last Winston Cup race.

I hit the Interstate with smoke coming out of the back, hit 80 in a half mile, and began to unknot; freedom felt teasingly imminent. We made it about 2 miles down, where there's another overpass over a crossroads. I looked over and then I saw them. THREE kidney dialysis clinics at one intersection, and one under construction on the last corner. AND THEY WERE THERE TOO; the Stepford Chickeneers. Lines of them in cars, minivan, trucks, bicycles, on foot and on motorcycles, blinkers blinkin in unison, nose to tail, with…buckets of chicken set up on the dash board. I knew then we had reached a critical moment, no time for hesitation, no room for fear. WE HAD REACHED THE CHICKEN RUBICON. There was no turning back.

I punched the accelerator a second time and we hit 90, 95, 100. The temperature gauge tickled the red zone, the V-8 strained at the mounts, the truck moaned a ghostly wail. I kept peekin over my shoulder to make sure we weren’t followed. At one point I saw a semi gaining on us; sure nuff, it was a Tyson truck on a delivery. I look up at the driver, pale white and hollow eyed, brow sweaty under his gimmee cap, and then his head swiveled to meet my stare. His were the eyes from the grave, his gnarled hand hooked over the wheel.

In in was clutched a half bitten drumstick.

Dale Earnhardt himself couldna' caught us after that.

We made Atlanta in record time but I couldn't sleep that night. Kept dreaming I was being chased by a couple Rock Islands, a banty rooster, and a big bolt necked Jersey Giant like FrankenRooster that kept squawking, “TWENTY PIECE BUCKET! TWENTY PIECE BUCKET!" at the top of his lungs. Ooooo, creeps me out just thinking about it.

If you think my tale is mere paranoia, think of it this way; chickens look all fine and gentle from the side. But did you ever look at one of 'em head on?? 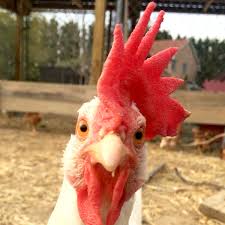 BE WELL, BUT NOT DONE
Hank: "Do you know how to start a man's heart with a downed power line?"
Bobby: "No."
Hank: "Well, there's really no wrong way to do it."
Top

Forget about the zombie apocalypse, I’m telling you the chickens are plotting against us. You can see it in their eyes. Prepare for the chicken apocalypse.
BE WELL, BUT NOT DONE
Hank: "Do you know how to start a man's heart with a downed power line?"
Bobby: "No."
Hank: "Well, there's really no wrong way to do it."
Top

?Chicken Apocalypse? - I think I had that at The Atchafalaya Café near Breaux Bridge

Funny story Boots. I travel through Mississippi annualy, and Meridian in particular. I know a little about what you write. Its kind of funny that if you come up through MS from the south on 59 you see numerous slaughter houses and truck loads of chicken on the road. If you come across MS from the west on I-20 you don't see so much of that.
Top

I smelled fried chicken from the Louisiana border all the way to Atlanta. Not a bad thing...
BE WELL, BUT NOT DONE
Hank: "Do you know how to start a man's heart with a downed power line?"
Bobby: "No."
Hank: "Well, there's really no wrong way to do it."
Top

Yes, the northern part of MS = Chicken, and lots of it, farm raised catfish, cotton fields, HWY 61 South out of Memphis, down through MS along the river, commonly referred to as "The Blues Highway", and Civil War History.
Last edited by GRailsback on Fri Nov 08, 2019 9:25 am, edited 1 time in total.
Top