Rate the joints and share your experiences, pictures encouraged

KFC down here is really good along with mcds, as for ribs and a lot of other stuff, there are a lot of "best ever" things said. I won't order ribs when out as they are always tough and no flavour, so I make them my way. On a level with ribs I've had in Hawaii. We have a local bar opened up 2 Saturday's ago, took the wife the first day open to see what the place was like. I walked up to the bar and when asked what I wanted I said my usual, lol, first day open. I got a blank look,lol. We had a few drinks and looked at the menu. It had their famous beef burger, how is it famous on its first day???

+1 on "to heck with chain restaurants when anything local-owned is open"
this applies quadruple for BBQ joints.
Re: Red Dumpster Cheddar Biscuits--it's too doggone easy to make yer own
drop biscuits and stir in some shredded cheese and brush melted garlic butter on top.
Just.Sayin'.
Top

I saw this and had to chip in my two cents, LOL.

I completely agree with the earlier posts. Dickey's is terrible. Here in Sacramento, the service is equally bad too. My one and only experience, we walked in and I thought to myself, "Dang if this design doesn't look like every bad cliche idea New Yorkers have about the South". Then I try to find the menu board... It's on the pick up side, and the person behind the counter gets snotty with us for being on the wrong side. We should have walked out right there. Instead we ordered, and got some BBQ that could best be described as mediocre (if I was being kind), and some pretty nasty side dishes. The fly buzzing the table kept us entertained though. Never been back. Swapped notes with other people who were equally unimpressed though.

As for take out fried chicken... I have to agree with one of the earlier posts. Most are terrible anymore. Popeyes used to be good when I lived outside Atlanta, but they're... Well, better than KFC at least out here.
Rec Tec 680
Weber 22" Premium Kettle Grill in Green

Dickey’s will do in a pinch. They’re hit and miss, but for people who aren’t accustomed to legit Q, it’s fine. No worse than any other fast food chain, which is what it is.
——————————————
There is love enough in this world for everybody, if people will just look - Vonnegut
Instagram/behindthepinecurtain
Top

Seems like I recently offended the owner of the local Dickey's when I posted on Yelp about the bad service, flies buzzing my table and how I could out-BBQ them with one hand tied behind my back.

Maybe I'll get a Bobby Flay style throwdown out of that last part.

Dickeys is the 7-11 of BBQ. Some of my Yankee transplant friends eat there every Wednesday because it's cheap.

Well, I guess I am a slow learner. I tried a Dickies when one opened nearby and the brisket was extremely dry and bland. Tried it one more time assuming it couldn't be that bad again, so I tried the pulled pork and it was the most flavorless thing I have ever put in my mouth. I have no idea how they stay in business. 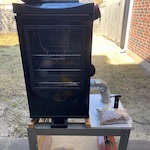 My family picks up Dickey's family packs for something quick and easy every so often. My wife and daughter have allergies to work around and they're one of the few places that are allergy safe for them. The only thing I order is the off-menu hot links. I like their baked-potato casserole and it's hard to mess up fried okra. I agree the brisket is bland.

When this happens, I tend to take the subtle hint that I'm falling behind in my BBQ duties

Barbecue may not be the road to world peace, but it's a start.
Top
Post Reply
39 posts