First we went tot he store to get some beef fajita strips to make nachos tonight. Of course, like every other store in the neighborhood, the meat turned out to be bad:

Note the good till date in the corner of the label

Now this was bad enough... At this point it's getting late though and we decide to just go pick up dinner... We go to Freebirds. A Chipotle clone that's actually a good bit better in some ways. When they're on their game, the adobo steak is great. BUT they blasphemed today: 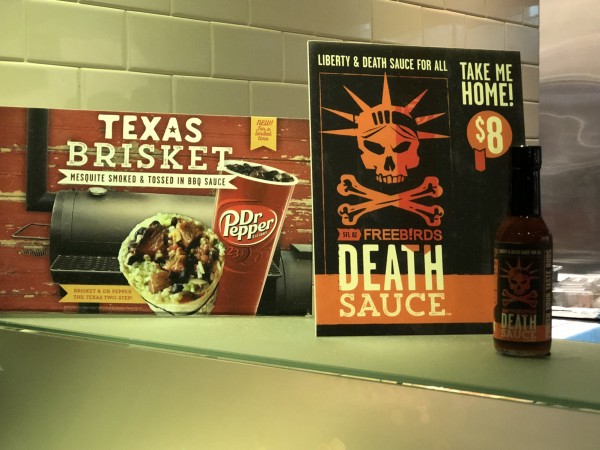 If they called it just brisket, I might not have objected so much. But they had to commit double blasphemy and call their quick serve beef TEXAS Brisket. Note in the ad that they have to drown it in sauce to cover up the meat too.

If all that wasn't bad enough, their "Death" sauce advertised next to it has no more kick than Taco Bell's hottest stuff.

Manager heard me in line going on about how that brisket wasn't smoked 16 hours, etc...and was NOT Texas Brisket, and she clocked out and scooted out the door, 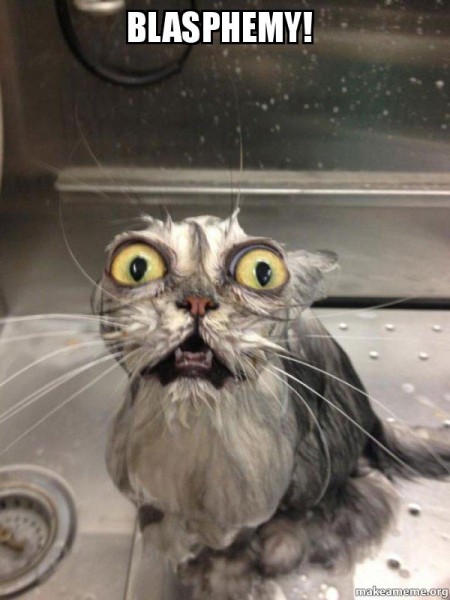 Must be an epidemic of spoiled meat goin on lately, first I read it somebody’s clicker and now this.

And nothin personal, but yer kitty looks like she’s taking it bit hard. Maybe some cat counseling... maybe an excorcism, I dunno.
BE WELL, BUT NOT DONE
Hank: "Do you know how to start a man's heart with a downed power line?"
Bobby: "No."
Hank: "Well, there's really no wrong way to do it."
Top

Here in California, just about all the problems from government on down to that bad meat can be traced to public apathy. Nobody (or not enough people) complain, so the stores just keep re-dying the meat and putting it back out.

That poor kitty is just an internet meme I found. I could relate though as my cat looked at me the same way after I gave her baths, LOL. Never got her head wet like that though.
Rec Tec 680
Weber 22" Premium Kettle Grill in Green

The List of Places that the Wife and I will never eat again is already on it's Third Edition and still growing.
It's just a matter of time before there's a major food poisoning tragedy for the record books.

OldUsedParts wrote:The List of Places that the Wife and I will never eat again is already on it's Third Edition and still growing.
It's just a matter of time before there's a major food poisoning tragedy for the record books.

Oh the stories I could tell there... 80% of the restaurants out here are on our banned list for giving us some level of food poisoning. Nothing super serious yet.

Freebirds has been OK, BUT trying to pass off anything they do as Texas quality brisket....

Wow, I guess Pa isn't so bad after all, lol.
Luckily, none of these problems here as far as food quality.
Wish you all luck, crossing my fingers for ya all
Top

I hear ya! We're somewhere in the middle...not EVERY piece of meat or bird is bad, and not EVERY restaurant gives us food poisoning or commits other forms of blasphemy, but, there is a reason we seldom dine out any more.

I feel your pain.
The list of supermarkets and restaurants we go to keeps shrinking. Even when the food from a restaurant is "safe" it's usually overpriced and mediocre quality.
I never shrink from complaining, and I hopefully make up for a few apathetic types.
Top

kinda funny... This post was supposed to be a humorous rebuke of Freebirds for trying to pass their brisket as real slow cooked Texas que. Instead we got off on the tangent of the bad meat in the original pic.

As for the constant bad meat at grocers... I'm going to be forwarding my pics to the county health department. Enough is enough.
Rec Tec 680
Weber 22" Premium Kettle Grill in Green

"Nobody Beats Me in the Kitchen" - Casey Ryback (Steven Seagal - Under Siege 2)
Life's Too Short for Bad BBQ.
Top
Post Reply
10 posts • Page 1 of 1