Traegers, Green Mountain, Smokin Tex and all other Pellet and Wood Chip Smokers

Well, it finally arrived! I sold the Camp Chef to a neighbor and pre-ordered the Weber SmokeFire EX6 back in January. It arrived yesterday, and, with a little help, got it all assembled!

Assembly was much easier than I expected. Everything was clearly labeled, and the only tool I needed that was not included was a Philips head screwdriver.

Started it up this morning and did the initial burn off, per the instructions. 600 degrees for 30-40 minutes. 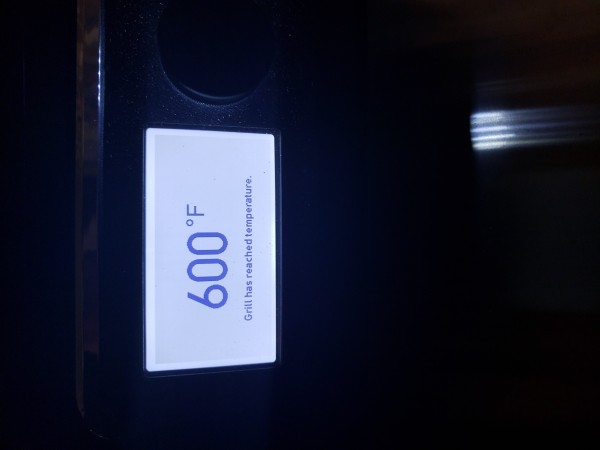 Initial impressions:
- This thing is large. I am curious to see how the temperature holds across the cooking surface.
- Quick start up. Given that it was the first time running it and the auger needed to charge, it started quickly and got to temp surprisingly fast, roughly 15 minutes.
- The last picture above is while it is running. No noticeable smoke leakage.

Too early conclusion: It appears to be very well made, with a lot of attention to detail and thought put in. The motor and fan seem to be very strong. The only two complaints that I have are (1) the location of the hopper makes it difficult to fill if, like me, it is close to a wall; and (2) due to the ash collection system, when it was at 600, I did notice some sparks falling out of the bottom, so be very careful if you're interested in one and intend to have it on a wooden deck or something.

I have a couple pork tenderloins marinating in Sucklebuster's Pork Marinade right now so I can test out the cooking. I'll post back my results!
Custom 24x48 offset trailer pit
Weber Smokefire EX6
Vision B Series kamado
Top

Based on my internet readings you'll want to watch out for two things.....

I won't get into the validity of these items but there has been a lot of chatter over the last several weeks. Also, some pictures of very good looking food so please share at your earliest convenience.

Congrats on your purchase.

Congrats on the Score, Counselor, looking forward to your Projects and Pics.

Initially, I read the reviews that have been posted about it. Unfortunately, I pre-ordered this thing so the reviews weren't available.

First glance, this thing puts out quite a bit of smoke. The flavor profile on the pork loin was excellent.

Now, moving to the critique of the unit itself.

There is ash everywhere. This thing is advertised as collecting 80% of the ash and grease in the disposable pan. So far, I would be the ash in the disposable pan at about 5%. The metal tray the ash is housed in collects about 50%. The rest is strewn about the grill, both inside and out. There was no grease in the pan. There was grease in the bottom of the cooker. Granted, pork tenderloins don't produce grease like a brisket, but the fact that there were no drippings in the pan tells me that it's all pooling at the bottom and, as others have noted, will eventually result in a grease fire.

I put 2 extra thermometers in to determine the heat distribution in the pit. As I am standing and looking at the pit, the center was set at 260. The left third was 241, and the right third was 209. That's a pretty big spread if you ask me.

I checked the hopper to see if the tunneling issue was present, as the reviews stated. It very much was. There's either not enough slope on the hopper to allow the pellets to freely travel, or the material creates too much friction.

I really, really wanted to like this grill. I like the size, I like the appearance, and I like the flavor of the food. Unfortunately, the negatives of the unit are too much for those to overcome. Especially the potential for a grease fire on long cooks.

So I've started the return process and am waiting to hear back from Weber.

If you listen to their promotional material, they put thousands of pounds of pellets through these during development and had no issues. That's either completely false, or something happened between the prototypes they were using and the production models they put out. Quite honestly, I expected much more from Weber.

Matt, hopefully the return process will not be to painful. I can hear and visualize your disappointment.
Top

So, while waiting for return information, i spoke with their customer service department. They are sending me a piece to fix the pellet feeding issue. They asked me to give it a shot on a long cook. Since its Weber, I decided to give them a chamce to fix it. I told them I would wait to return it and try the part if I could still return it afterwards. They said I could, so i will give it one more shot, and this time, its going to be a pork shoulder. See about these grease fires.

Matt, I am hopefull that the add on piece works for you, and doesn't pool grease as has been reported. I am also hopefull that they are not pleading with you to keep it because they are already inundated with returns. Hopefully they will do right either way.

If not, we know a good attorney here on the forum.
Top

Wow thanks for review; The Webber equipment I have has performed perfectly, I am sorry to see that this has its problems; The folks at work have been talking to me about it saying how great they have heard it is; I have not read any reviews except yours which does not look favorable; I will watch and see what you follow up with..
Thanks

So, I have to give some (not all, but some) kudos to Weber's customer service. When I got off the phone, I was told the part would take 5-7 days to arrive. Turns out, they over-nighted it and sent a bag of pellets too. I'll install it this evening and see how it runs without any food on it.

The only reason that I give them partial kudos, is because their solution to the grease problem is to put a pan between the grill grate and the flavorizer bars. To me, that's a half-hearted fix. They even termed it "like you would on any other grill." My response was "the only grill I put a pan under the grate is my kamado". Never had to do it on my Camp Chef.

Again, I'll give them a shot on a long cook, probably this coming week unless I can snag a pork shoulder this weekend for a test cook.

in response to the pan... my Traeger which is years old and my FEC in my avatar both have pans to catch drippings and drain them to a bucket or hotel catch pan. You may be the one to teach Webber a few things...

A couple observations 45 minutes into the test. 1. The software update seems to have worked in reducing the fan speed. Nowhere near the volume of ash being thrown about. 2. Likely due to the reduced fan speed, pellet consumption has dropped dramatically. No tunneling yet, but it's still early.
Custom 24x48 offset trailer pit
Weber Smokefire EX6
Vision B Series kamado
Top

Return to “Pellet Cookers and Smokers”